And be assured all of our seed will produce the same plant year after year, we only have ...

And be assured all of our seed will produce the same plant year after year, we only have organic, heirloom and open pollinated seeds.

So when you grow the plant and save it's seeds, you will be able to reproduce the identical plant every time.

Unlike GMO seeds or Hybrids, which are one time use.

Site. Grow peppers in full sun (at least 6 hours per day) in soil that is rich in organic matter, moisture retentive but well draining. Peppers prefer a soil pH of 6.0 to 6.8. If the pH is below 6.0 add limestone to the soil; if the pH is above 8.0 add peat moss to lower the pH. A safe bet is to always work aged garden compost into beds prior to planting. The optimal soil temperature for peppers is 65°F (18°C) or warmer. Choose a site protected from wind. Avoid planting in beds where other members of the Solanaceae family (peppers, eggplants, tomatoes, and potatoes) have recently grown. Some peppers such as Jalapeño, cayenne, and mirasol prefer arid regions; others such as habanero, Scotch bonnet and datil prefer humid regions.

Water and feeding. Keep peppers evenly moist but not wet particularly when blossoms appear and fruit begin to form. Soil that goes too dry can result in flower drop. Keep the soil evenly moist just after transplanting peppers to the garden; avoid under or over watering peppers early on. Add aged compost to planting beds before planting and again at midseason.

Once hot pepper plants are established you can vary the watering. Hot peppers that are deprived of water and become slightly stressed will produce more pungent fruit.

Care. Keep planting beds well weeded to avoid competition. Peppers are shallow-rooted, so cultivate around peppers with care. Mulch to keep soil temperature and moisture even.

Avoid high nitrogen fertilizers which will create large leafy plants with few or no fruits. High temperatures and wind can cause flowers to drop and plants not to set fruit.

Hot peppers can put out shoots that become leggy. Cut these shoots back to keep the plant compact.

Peppers will begin to flower almost as soon as the plant forms branches. Pepper plants have complete flowers which means each flower contains both a male and female part; as a result, the pepper is self-pollinating. Wind, bees and other insects, and a light shake of the plant by a human hand can aid pollination.

Container growing. Peppers can be grown in a large container. An 8-inch (20 cm) pot will accommodate a single plant. In larger containers, set plants on 12 inch (30 cm) centers. Peppers can be grown indoors. Peppers started indoors before the last frost in spring will get a head start on the season. Extend the season in the fall by moving plants indoors if frost threatens or if temperatures warm to greater than 90°F (32°C). Bring outdoor started peppers inside for a few hours a day at first until they get used to the lower light available indoors.

Pests. Peppers can be attacked by aphids, cutworms, flea beetles, and hornworms. Discourage cutworms by placing a collar around each transplant at the time of planting; hand pick hornworms off of plants. Flea beetles and aphids can be partially controlled by hosing them off the plants and pinching out infested foliage.

Diseases. Peppers are susceptible to rot, blossom end rot, anthracnose, tobacco mosaic virus, bacterial spot, and mildew. Plant disease-resistant varieties. Keep the garden clean and free of weeds where pests and diseases can shelter. Remove infected plants before disease can spread. If you smoke, wash your hands before working with the plants to avoid spreading tobacco mosaic virus.

Harvest safety. Hot peppers contain organic chemicals called capsaicinoids which can burn the skin and eyes. Wear rubber gloves when harvesting hot peppers and be careful not to rub your eyes. The best antidote for burning skin to to rub them with isopropyl (rubbing) alcohol. 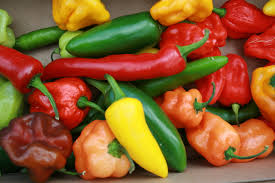